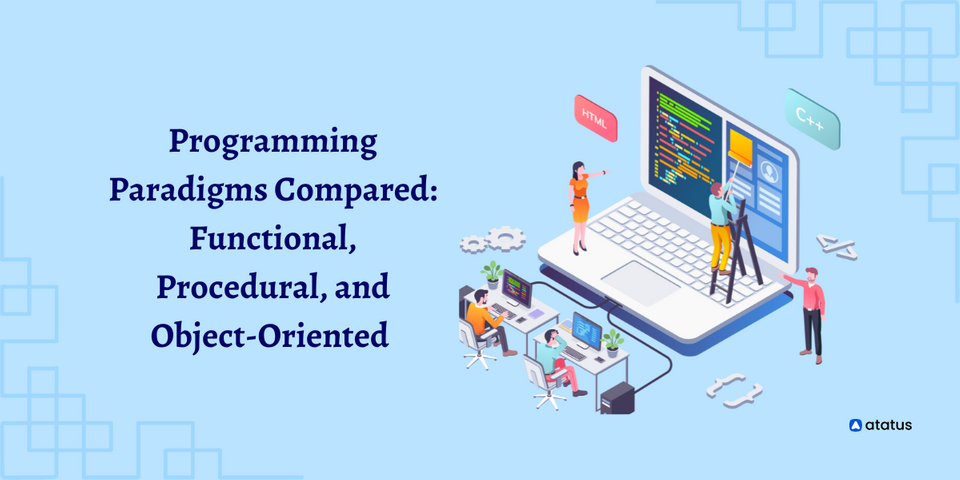 Conceptually, a paradigm is a system of concepts and practices that reflect the current state of our understanding of the field.

In general, a programming paradigm refers to a style, way, or classification of programming. Programming languages are used in order to solve problems. A paradigm's difficulty varies according to the language.

Paradigms can be used in several programming languages, but a strategy or methodology must be followed. Numerous paradigms can exist within the same program, and paradigms need not be mutually upscale.

The different requirements and developer practices have led to the creation of procedural programming, object-oriented programming, and functional programming paradigms over the years.

Language independence is one of the benefits of functional programming, which has its roots in mathematics. Executing a series of mathematical functions is the key principle of this paradigm.

This type of programming style is declarative. In contrast to an imperative style, which emphasizes "how to solve", this style focuses on "what to solve".

Rather than using statements, it uses expressions. Expressions are evaluated to produce values, while statements are executed to assign variables.

There are two main characteristics of these functions. Their output is the same for the same arguments regardless of any other factor.

The second advantage is that they do not have any side-effects, that is, they do not modify any arguments or local/global variables or input/output streams.

Immutability is one of the more recent properties. The value returned by a pure function is its only result. The results are deterministic.

The function-based programming approach makes debugging programs easy due to the lack of side effects and hidden input/output. Using pure functions also simplifies the process of writing parallel/concurrent applications.

The following is an example of a pure function:

Unlike the other programming paradigm, functional programming does not employ for and while loops. Recursion is used instead for iteration in these languages. Recursive functions are used to execute recursion, which calls themselves continually until the base case is obtained.

In functional programming, variables cannot change their values once they have been defined. As a result, there is referential transparency. By using this method, the same language expression will produce the same result.

Functional programming does not use assignment statements. It is necessary to define new variables in a functional paradigm program in order to store additional values. At any given moment, a variable's state will never change in such a program.

Since variables may be replaced with their actual values at any time during the execution of the program, Referential transparency eliminates the slightest possibility of undesirable effects.

Example: The string.replace() method is referentially transparent, since using jane.replace(‘j’, ‘J’) will always result in the same result because replacing returns the new object rather than updating the original.

4. Functions are First-Class and Can be Higher-Order

The functional programming style treats functions as variables. Thus, they qualify as first-class functions. A data structure is a collection of characteristics that can be passed around as parameters or returned from functions or stored in data structures.

In the case of variables, they are immutable, meaning they cannot be modified once they've been initialized. A new variable, however, can be created. Varables are immutable, so they maintain state throughout the program.

In programming, it is defined as a language derived from structure programming and based on the use of call procedures. Essentially, procedures are the functions, routines, or subroutines that specify the computational steps that need to be performed.

The process involves breaking a task down into variables and routines by following a series of instructions. Programs can call procedures at any point during execution, either by other procedures or by themselves.

A program is designed using a top-down approach in procedural programming. As a result, it emphasizes the concept of functions and divides large programs into smaller parts.

The scoping concept is concerned with setting the locality of entities (objects) within a procedural program. Without explicit permission, scoping prevents non-local variables from being accessed from other procedures.

Using this method, components are broken down into interchangeable chunks of functionality that can be reused and shared.

A Parameters can be passed into a procedure call via this mechanism. It is possible to pass parameters as references or as values.

In computer programming, object-oriented programming organizes/models software design around data or objects instead of functions and logic. It consists of two words, "object" and "oriented".

As defined by the dictionary, an object is an article or entity in the real world. It describes something or someone who is oriented towards a particular kind of entity or thing. Essentially, it is a programming pattern that wraps around an object.

Programming models based on OOP are considered to be the most popular among developers. Programs that are large, complex, and continuously updated and maintained benefit from this technique.

As a result, abstraction, inheritance, polymorphism, and encapsulation are all fundamental concepts that facilitate the development and maintenance of software. As with object-oriented programming, these are the four pillars.

It is much easier to simulate real-world events with OOPs than with traditional programming languages. Object-Oriented Programming allows us to provide real-world solutions to problems.

Data hiding is provided by OOPs, while global data can be accessed anywhere in a procedure-oriented programming language. Below is an example of OOPs;

It is a process of hiding implementation details and revealing only what is necessary to the outside world. Objects have interfaces through which the outside world can interact with them. An example would be a user who only knows how to use WhatsApp, but not how to use code or other things that are hidden.

The term encapsulation refers to the act of wrapping code or methods (properties) and the associated fields or variables into a single unit. It is possible to create variables or fields that can be accessed or updated only by getters or setters, and to hide them from other classes by using the private access modifier.

Using the process, a single name can take on a variety of forms. Depending on the context, the same object can behave differently. There are two types of polymorphism in OOP:

Functional vs Procedural vs OOPS

There are several programming paradigms that provide a framework for approaching problems. Practices are governed by such paradigms, which are based on principles and methods.