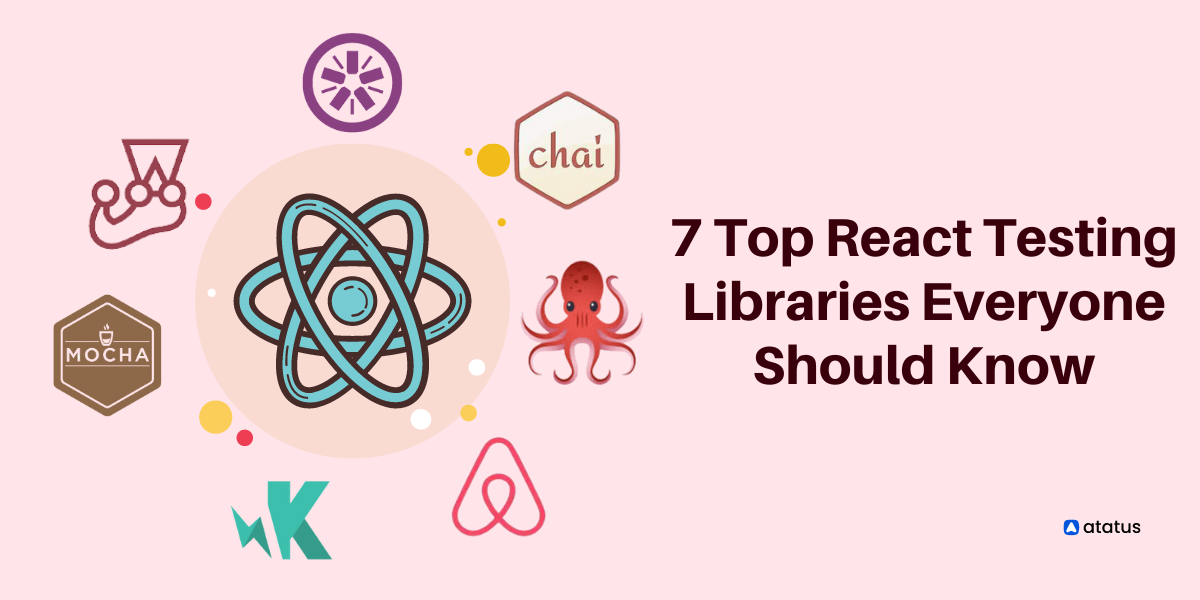 In any application, testing is crucial, as it verifies that everything is working as expected and that what we are going to deliver to the end user is what was described in the project plan.

Typically, it allows developers to inspect whether their app meets functional, performance, and UI specifications.

Web applications can be tested using a variety of methods and types. These testing methods have already been combined into reusable libraries by many open-source developers.

In addition to being easy to use, React makes it possible to build any web application's UI regardless of its complexity. Also, getting a better impact on your user experience requires React monitoring.

React monitoring is made simple with Atatus hence, you can monitor, troubleshoot, and optimize the performance of your React apps. Your app does not require any code changes for the installation process. Get instant access to hidden React errors.

Many libraries are available for testing React components in the app in the React community. In light of this, let's get started with a look at the subsequent react testing libraries and tools for the year 2022.

Chai is a prevalent assertion and expectations library for node and for the browser that is compatible with all JavaScript test frameworks. In a test, an assertion specifies what to expect.

With Chai, assertions are integrated, unlike Mocha, so most developers use them to test React applications. When you report what to expect in a test, functionality such as expect, should, and assert can help.

The Enzyme framework can be used to develop assertions for functions, and also for components in the future.

Despite not being as popular as Jest or Mocha, Chai is becoming more popular. In most cases, it is used in conjunction with Mocha and Enzyme or Jest and Enzyme.

Like Node's assert library, Chai is an assertion library. Testers find it much easier to test with it because it offers a multitude of assertions that they can run.

Chai can be found on NPM. Type this command to install it:

Many developers consider Jest to be one of the best React testing libraries. Facebook is responsible for designing and propping it. Additionally, it supports TypeScript, Node.js, Angular, and Vue.js, along with React.

Testing React components with Jest is a popular practice at Facebook, used by Uber, Airbnb and other companies. Therefore, Jest is recommended by the React community as the preferred testing framework for React.

It supports most JavaScript projects right from the start, notably create-react-app, NG, Vue, and even TS or Babel. With React, Jest's UI snapshot testing and complete API philosophy make a great combination.

In addition to its performance advantages, process-based parallel testing is easy to use and offers the choice of giving priority to failed tests. Testing frameworks for React are probably most popular with Jest, with over 16M downloads per week.

Jest is an easy-to-use tool. There is little setup required, and it's available in Node Package Manager (NPM). Jest tests can be written by anyone who is familiar with JavaScript.

Using Mocha, you can test Node.js applications in any browser and with any assertion library, supporting asynchronous testing, test coverage reports, and assertion libraries.

In addition to being extremely configurable, the software entitles the developer to select which tools they want to use to test their code, while also permitting you to incorporate or out most supporting libraries and tools.

As with Jest and other frameworks, Mocha can also be combined with Enzyme, Chai, and other libraries for assertions, mocking, and so on when used with React.

Often, if advanced configurations are needed with a mature and rich toolset, some prefer to test their React apps as well.

However, this can also become a hassle as you will have to add more tools to your workflow to complete common tasks (like snapshots).

You can use these development dependencies in your project:

Karma does not support testing frameworks or assertion libraries (compatible with Jasmine, Mocha, etc.). The HTTP server in which the test runner runs produces the HTML file for the test runner.

A JavaScript program can be executed in multiple real-time browsers with Karma. The purpose of this tool is to make it as easy as possible to write code and get information from your tests, without having to muck around with configuration.

Testing can be run on real browsers and devices, such as mobile phones, tablets, and desktops, while the entire feedback loop takes place in your IDE. Karma also works with continuous deployment to Jenkins, Travis etc.

The Karma package runs on Node.js and is accessible via npm. If you want to install Karma (as well as all the plugins you need) locally in your project directory, you should follow the steps below.

Karma must be installed by:

If your project requires plugins, install them as follows:

Implying Jasmine as your test runner and BDD framework allows you to test all types of JavaScript applications. The user interface is tested on several devices, with different resolutions, both from a visibility and a response perspective.

It is an application testing framework for JavaScript based on Behavior Driven Development. A JavaScript framework is not required, nor does it rely on browsers, DOM, or any other JavaScript elements.

Many developers who use the Angular CLI love using Jasmine for testing their applications. Generally, developers use it in collaboration with Babel and Enzyme to test React apps.

The CLI tool has traditionally been used with frameworks like Angular. In order to streamline this workflow, a dedicated helper util library was built.

The Jasmine framework employs behavior-driven development to test JavaScript code. There is no reliance on any other JavaScript framework.

With npm, you can install Jasmine locally:

Jasmine should be added to package.json using this,

A leading developer and maintainer of the enzyme framework is Airbnb. An enzyme is a testing utility, not a testing framework, that abstracts the rendering of components to make it easier to test their output.

Additionally, the enzyme is employed by other testing libraries alongside Jest, Mocha, and Karma. Among the companies that use the enzyme are Airbnb, Frontend, BlaBlaCar, and Kaidee.

A similar feature to JQuery's manipulation of DOM elements is Enzyme's ability to manipulate, traverse, and even pretend to be a runtime element.

If you want to get started with enzyme, all you have to do is install it using npm. If you are using react (or another UI Component library), you will need to install enzyme along with an Adapter. The following instance shows how to use enzyme with React 16:

According to reports, 71 companies use React testing library to test their applications, including Graphy, Ze Delivery, Commercetools, Hivebrite, MPB, and Page Builder.

An extensive community of developers supports the React-testing-library, created by Kent C. Dodds. By simulating the user behavior in your tests, you can easily test the component.

As an extension of react-dom, it makes use of test-utils and react-dom. Testing is done with DOM nodes rather than rendered components in the React testing library.

There are some limitations with this library, including that you cannot perform shallow rendering or access state-based information.

A React web application can be tested quickly with a number of React testing libraries. All of them have their benefits and drawbacks.

React testing is made easy with the Jest library. For better results and experience, it is frequently used in conjunction with Enzyme. React testing frameworks like Jasmine and Mocha are also popular with Enzyme.

React's modularity makes TDD easier. You can put this theory into practice without pain by selecting the right tooling, from components to integration and end-to-end testing.

To create a smooth yet flexible workflow that can adapt when upgrading, extending, and modifying your code, you need the right testing framework (e.g. Jest etc) coupled with the right assertion/manipulation libraries (e.g. Enzyme etc).

As a result of virtually isolating components from their projects (e.g. Bit etc), modularity and test-driven development are taken to an entirely new level.

Visualize React errors and performance issues influencing your end-user experience. With React performance monitoring of Atatus you can identify and resolve problems faster with in-depth data points that assist you in analyzing and resolving them.

Using Atatus, you can get an overview of how your customers experience your React app. Learn how to identify the root cause of a slow load time, route change, and more on the front end by identifying performance bottlenecks in the front end.

Ensure that your React app sends all XHR requests. Monitoring and measuring the response times and failure rates of XHR calls. Optimize AJAX request performance by identifying slow and failed calls. Analyze AJAX calls in real time based on the browser, the user, the version, the tag, and other attributes.

Identify the reasons behind bad front-end performance and slow page loading that are impacting your customers. Inspect individual users who are experiencing poor performance because of slow pages, React exceptions or a failing AJAX method.

Identify how your end users' experience is impacted by the network or geography. In addition to identifying slow React assets, long load times, and errors in sessions, session traces provide a waterfall view of the session.

Take a closer look at your React app performance with Atatus. To get started activate Atatus free-trial  for 14 days!