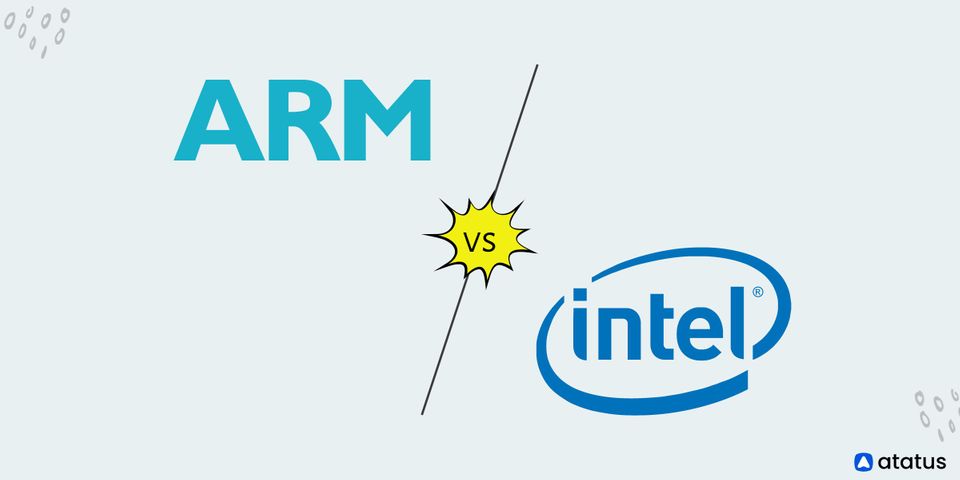 Most computing devices today are likely to have an Intel processor, or an ARM (Advanced RISC Machine) processor, such as the CPU in your smartphone or tablet. Both chip architectures are optimized for the low-power operation to provide mobile devices with the long battery life they require.

However, they reflect different mindsets from a technical standpoint. The ARM architecture is designed to be as basic as possible to minimize energy waste, while Intel's range employs a more complicated design that benefits from interoperability with the company's desktop and laptop CPUs.

We'll go over the differences (ARM vs. x86) and applications of each category in this article.

What you will learn

ARM and Intel Processors: What Are They?

Processors, or Central Processing Units, are microscopic chips that serve as the brains of computers and cell phones. Calculations, caching vital information for quick access, and other tasks are handled by the CPU.

Since ARM processors are a form of architecture, there is no one manufacturer for them. This technology is used by both Apple and Android on their mobile devices, whereas Intel is used on computers.

For the time being, ARM is the dominant architecture: iPads and iPhones, as well as Windows Phone devices, use ARM entirely, so if you're interested in these platforms, the difference between ARM and Intel isn't something you should be concerned about.

Modern Intel and ARM-based CPUs can be traced back to early processors in computers brought to market in the early 1980s, namely the Acorn Computers BBC Micro and the Intel 8088 used in the original IBM PC. These paved the path for the two most used CPU designs today.

It's worth noting that, despite having two different evolutionary pathways, they converge in terms of what we utilize these CPUs for nowadays.

Comparison Between ARM and Intel

Before jumping into the comparison, we need to mention that both have their advantages and disadvantages. In general, there isn't a better option, yet one may be superior to the other depending on how you intend to use it.

The primary idea behind CISC is complex hardware and simple software. That indicates more fundamental assembly language functionality in this case.

Since ARM processors execute commands in a single cycle, functions are reduced. As a result, ARM processors are more suited for power-conscious devices, such as mobile and embedded devices.

RISC is based on the idea of simple hardware and complex software. Greater capability in lower-level programming languages, such as assembly, can be a game-changer when it comes to lowering power usage.

Intel processors are incapable of comprehending ARM code, and vice versa. As a result, the operating system and software must be tailored to a single CPU type.

It is possible to execute software designed for one type of CPU on another, although this usually results in significant speed and efficiency losses.

Apple's Rosetta 2 code translation software is an exception. Their custom ARM CPUs were created with Rosetta 2 in mind, and they enable near-seamless software execution on Intel-based Macs. Rosetta 2 has a modest performance penalty overall, yet it isn't perfect.

Microsoft's ARM-based Surface devices are a more common example. When these attempt to run x86 code using emulation, the performance penalty is so severe that the software may become unusable.

The power consumption of ARM-based CPUs is a considerable advantage over Intel and other x86 processors. It turns out that the RISC technique, along with ARM's design innovation, results in extremely cheap CPUs. This is why the smartphone and tablet markets have been controlled by ARM.

It's why your phone may last up to 24 hours on a single charge, yet your Intel laptop's larger battery may only last a few hours if you're lucky. In fact, with an M1 Mac, you can achieve close to 20 hours of movie playback, which is a lot for a laptop.

When power consumption is taken into account, as it is with a computer connected to the wall, Intel and other x86 CISC processors crush ARM-based RISC CPUs.

In terms of computing power, mid-range smartphones have now exceeded the "good enough" threshold and are powerful enough to suit user needs daily.

Things don't seem so good for x86 Intel CPUs if we flip the storey to how much work an ARM CPU can do for every watt of energy it consumes. Even though businesses like Intel have worked hard to develop power-efficient CPU models, there is still a gap.

Consider the comparison above. The Thermal Design Power (TDP) of the Intel i7-9750H is 45W, while the TDP of the Snapdragon 888 is 10W. Nonetheless, the 888 comes close to matching its benchmark performance.

When all scores are taken into account, the ARM CPU matches 74% of the high-end laptop Intel CPU's score. Keep in mind that the ARM CPU is housed within a smartphone and has no active cooling. The performance-per-watt gap between these technologies is exemplified by the fact that a large laptop device with active cooling and more than four times the TDP has such a minor performance benefit.

The usage of asymmetrical CPU cores is an intriguing advantage on the ARM side of things. Multiple, but identical, cores are found in Intel and other x86 processors. ARM CPUs, on the other hand, frequently feature many cores that are all different.

An 8-core ARM CPU in a smartphone, for example, might contain four low-power cores that are fast enough for common operations like browsing the web, viewing videos, listening to music, and managing minor background chores. The four high-performance CPUs kick in as soon as you start a video game or start doing content creation chores like photo editing.

The Processor of Choice for Windows and Android

If you're considering purchasing a Windows tablet, the difference between ARM and Intel is also worth noting. When you purchased an ARM-based tablet in the past, you received a trimmed-down version of Windows dubbed Windows RT, which could run full-screen applications from the Windows Store but not conventional desktop software.

With the arrival of the Surface Pro X in 2019, things changed. Even though the tablet's casing hasn't changed much from prior incarnations, Microsoft hasn't abandoned the ARM processor. The Surface Pro X is an ARM-based tablet that runs full Windows rather than a diluted version.

The processor expands customers' options from a Microsoft Store-only application selection to a variety of applications, with one exception. Because many 64-bit versions of the software aren't compatible with the Surface Pro X yet, users may need to find the 32-bit version of the software to run it. We're glad to see Microsoft isn't abandoning ARM chips in its mobile product lineup, but there are still a few issues that could prevent you from using it.

The ARM CPU may be sufficient for your Windows-based tablet, depending on your needs. However, if you're a gamer or want more out of your gaming pc, you'll want to stick with Intel.

Intel-based devices can run the entire spectrum of Android applications, including those designed specifically for the ARM architecture. If an app contains ARM-specific code, however, it must be translated before it can be run.

Since this requires time and energy, battery life and general performance may suffer as a result. Whether this is a serious issue is debatable: our tests show that Intel lags behind ARM in terms of battery life, but the difference isn't significant, and overall performance is generally excellent.

In any case, Intel is working hard to encourage developers to create Intel-native versions of their apps, so translation should become less of an issue in the future.

ARM or Intel - Which Processor is Better?

As we said before both ARM and Intel processors have advantages and disadvantages at the current time. What you want to do with your electronic devices and whether they're compatible with other hardware and software play a big role in deciding which is better for you.

People who were adamant about one side or the other have been upset over the last few years. Apple's ARM processors are now being used in what were once typical Intel-based Macs.

While we've seen some fantastic things from Microsoft, only time will tell. Both processors are always improving, so what's wonderful now might not be so great in a year.

Apple promises that the M1 processor will deliver double the power for a third of the battery use and has the best CPU performance per watt.

Why is Everyone Using ARM these Days?

The processor industry is a complicated one, with only a few designs from a few companies capable of competing on the high end. Intel or AMD, which both manufacture x86 CPUs, usually retains the performance crown. ARM-based CPUs from Apple and Amazon have recently given Intel a run for its money.

The Graviton2 CPU from Amazon isn't as fast as Intel's server counterparts, but it's affordable and uses less energy. Given how much better it was than Graviton1, its future edition will almost certainly face stiff competition in the server space.

The Apple Silicon M1 processor, Apple's first non-mobile CPU, is faster than desktop Intel CPUs and nearly as fast as AMD's Ryzen 5000 series, which holds the current performance crown. Apple Macbooks are currently the world's fastest computers, much to the displeasure of PC enthusiasts, due to special silicon.

They're so far ahead in the laptop market that Windows on the M1 Macbook is faster than Windows on the Surface Pro X, even though Windows on an ARM is only run through an emulator. As if that weren't terrible enough, it also outperforms the Surface with a Geekbench Single-Core score of 1,390, compared to the Surface's 802, which is ridiculously low.

Microsoft is also reported to be working on its ARM processor, and while this rumor comes from the Azure server space, if they can match Apple's performance, they'll certainly use the same chip for the Surface.

In the end, there isn't much of a difference between ARM and Intel processors. You can use either Google Chrome or YouTube to watch videos. You may be doing it right now, as ARM-based processors are found in nearly all Android phones and every iPhone.

For most people, the most significant difference is that older Intel software will need to be recompiled to operate on ARM as well. This is simple in some cases, but not all software, particularly legacy applications, will be supported. Even so, Intel emulation, which Windows is beginning to offer, can typically handle it.

There are many differences in how applications are generated for developers, but most compilers these days do a decent job of supporting the major instruction sets, so you won't have to make any modifications to get it to compile for different platforms.