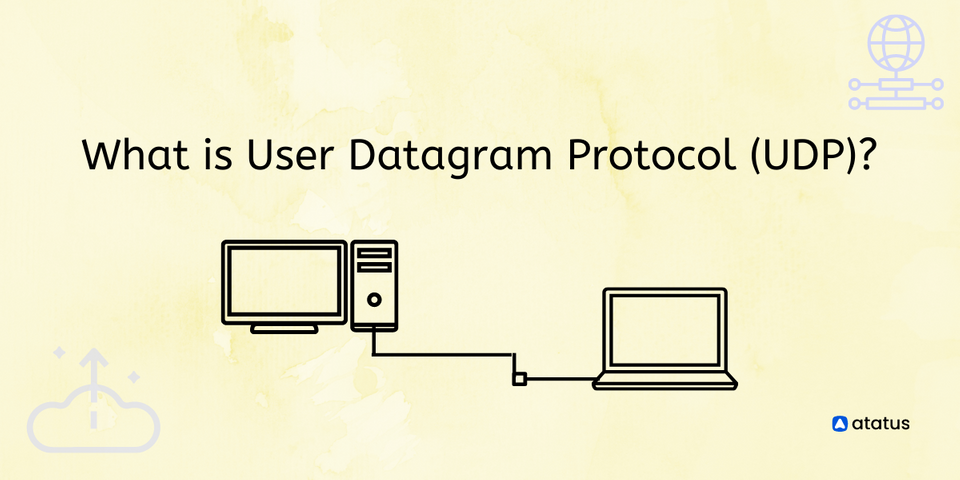 One of the easiest transport layer protocols available in the TCP/IP protocol suite is the User Datagram Protocol (UDP). The communication mechanism involved is minimal.

With UDP, neither the receiver nor the sender receives any acknowledgements of packets received. This protocol's shortcoming makes it unreliable and easier to process than many other protocols.

Although UDP is considered an unreliable transport protocol, it uses IP services to ensure the best attempts are made to deliver data.

User Datagram Protocol (UDP) is a communications protocol designed for the establishment of low-latency and loss-tolerant connections between websites. A time-sensitive transmission such as video playback or DNS look-ups is normally handled by UDP, or User Datagram Protocol.

Because no formal connection is established before data is transferred, it speeds up the transmission of data. As a result, data can be transferred rapidly, but packets can be lost in transit, which means that DDoS attacks are easily possible.

The UDP protocol is a method of transmitting data besides TCP. The two protocols are often called UDP/IP or TCP/IP since they run on top of IP.

Datagrams are sent between computers using the UDP via IP. In the UDP, data is gathered into UDP packets and header information is added to the packets.

A packet length and a checksum are included in this data, as well as the source and destination ports. UDP packets are sent to their destinations after being encapsulated in IP packets.

The UDP protocol does this much simpler than other protocols; it sends packets to a target computer directly, without first establishing a connection, without checking whether the packets arrived properly or showing their order. It is called a 'datagram' when referring to UDP packets.

TCP is another common transport protocol, but UDP is faster. A 'handshake' automated process establishes a connection between two computers in a TCP communication.

The data packets will only be transferred once the handshake has been completed. This process does not apply to UDP communications instead data can be sent from one computer to another.

In addition, TCP communications indicate the order in which data packets should be received and confirm that packets arrive as intended.

If a packet does not arrive, for say, due to congestion in intermediary networks; TCP requires that it be re-sent. UDP communications do not include any of this functionality.

Some advantages arise from these differences. Because it does not require a handshake or verification of data delivery, UDP is much faster than TCP.

Despite this, there are tradeoffs associated with this speed. It is not possible to resend a lost UDP datagram. Because of this, UDP-based applications must be able to handle error messages, data loss, and duplicate data.

In technical terms, such packet losses are less caused by UDP than by how the Internet operates.

Most internet routers do not order packets or guarantee their arrival since it would require far too much memory. TCP works around this problem when applications require it.

Source port number: Packets are sent to a port identified by 16 bits of information. It is possible to set this field to zero if the recipient computer does not need to respond.

Destination port number: The port on the device that receives the data. Between 0 and 65,535 are the possible UDP port numbers. An application-level service on the destination machine can be identified by this 16-bit information.

You can view the list of UDP ports in linux using the following command:

Length: A UDP packet's header and its full 16-bit length are specified in this field. Because the header size is 8 bytes, the minimum value would be 8 bytes. As a result of the IP protocol being used to transmit data, the UDP length field has some limitations.

Checksum: In addition to being 16 bits long, it is also not mandatory. Checksums are used by the receiver’s device to validate the integrity of the headers and payloads of the packet. IPv6 is obligatory, while IPv4 is just an option. As opposed to IP, UDP does not apply checksums to the header and data portions of the packet.

Data loss tolerance is an asset of the User Datagram Protocol, which makes it a good choice for applications that require data resilience. The UDP protocol has the following attributes:

Violations and threats to DDoS - UDP

Unlike TCP, UDP does not require a sender to receive packets from a receiver in order to start communication. DDoS attacks targeting UDP comprise:

Malicious parties can take advantage of DNS amplification threats by sending UDP packets with a mocked IP address, which corresponds to the victim's IP address.

After sending their response, DNS resolvers notify the victim. DNS responses are drafted in such a way that they are much bigger than the initial request, causing attacks to be intensified.

Especially in large-scale implementations with numerous DNS resolvers and many clients, it can be devastating for the target system.

With UDP flooding, large quantities of spoofed UDP packets are sent to numerous ports on a single server, knowing that the packet's real source cannot be verified. In retort to all requests, the server receives an ICMP 'Destination Unreachable' message, overburdening the server's system.

Aside from UDP flooding, DDoS attacks generally create network congestion by transmitting immense amounts of fake UDP packets to create generic network layer attacks. Using a cloud DDoS mitigation solution, a network's resources can only be scaled up on demand to prevent these attacks.

A server's UDP ports can be found by sending UDP packets to their ports in order to determine which ports are open by an attacker. Servers responding with ICMP 'Destination Unreachable' messages are closed. As long as there is no response, the perpetrator is left to speculate that the port is open, which he uses to plot system exploitation.

Most application developers are aware UDP does not deliver any kind of reliability, e.g., it does not allow packets to be retransmitted that are lost. Typically, this is the primary reason to use UDP.

An application can receive multiple copies of the same UDP datagram due to the best effort service's lack of protection from datagram duplication.

In this regard, application designers should ensure that their applications skillfully regulate datagram duplication and may need to enforce mechanisms to detect duplicate datagrams.

As a result of routing transients, intermittent connectivity, or mobility, some packets may also be delayed considerably compared to others on the Internet.

UDP datagrams can be reordered, resulting in them arriving at the receiver in a different order from when they were transmitted. Datagram ordering must be restored by the applications that require it.

A lot of computer games and video conferencing use UDP. In addition to allowing packets to be dropped, the protocol also enables packets to be received in a different order than they were sent, making the protocol more efficient.

Atatus assists to Identify and fix problems with your web and back-end apps using our full-stack monitoring. Utilize unified monitoring to identify performance bottlenecks and optimize your app for the best user experience.

With application monitoring, you can optimize your application. With full-stack monitoring tools, eliminate errors by instrumenting, analyzing, troubleshooting, and rectifying them.

Ensure that users have a seamless experience. Observe the performance of your applications and relate them to business outcomes using full-stack observability.

Interested in actionable data? Take advantage of the 14-day free trial of Atatus!