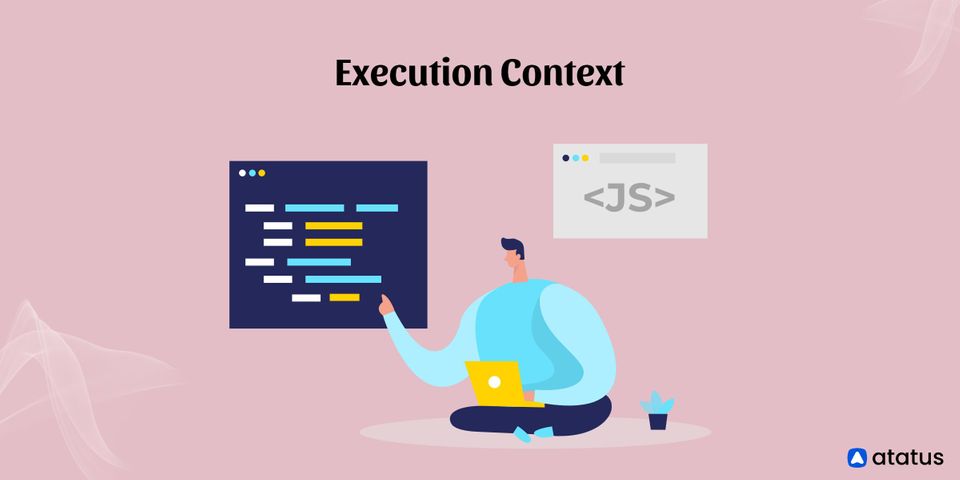 From the standpoint of understanding and complexity of learning, the idea of execution context has been projected as an advanced JavaScript concept in several circumstances. Yes, if not mastered with the right examples in the proper order, this may appear complex. Every newcomer to JavaScript should understand how JavaScript works and why confidence in this fundamental concept is so vital.

The most fundamental aspect of the JavaScript programming language is the execution context. In this article, we'll take a closer look at this concept to see why it's not just important but also simple to grasp.

What is Execution Context?

The more we go into this topic, the clearer it becomes what the environment is. For the time being, think of it as a box containing all of our code.

Different forms of code exist in JavaScript. In the global context, there is code. There's also code that's contained within a function context. Within an eval function, there is also code. Each of these distinct categories of code is assessed in its execution context.

In JavaScript, there are three different types of execution contexts:

The window object refers to or is connected to the global object, which is always created before the JS engine enters the global execution environment and contains properties and methods like localStorage, innerWidth, and event handlers, among others.

The this object (in the global execution context) is an object that points to or is hooked to the window object.

So, what happens if the JavaScript code has declared variables and functions?

It will search all of the code for all variable and function declarations (variables and functions that are not nested to any other function) and place them in the global memory alongside the window and this object.

A key:value pair of parameters anticipated inside a function is stored in the arguments object. It also has a default property called length, which counts how many parameters that function has. When the function's argument is empty, the argument object defaults to a length: 0.

The eval function is a function that should be avoided at all costs. An execution context is constructed and pushed into the call stack whenever the JS engine encounters an eval() function. It evaluates a string that is passed as an argument.

As a result, if you mistakenly sent harmful code as an argument, or if a hostile party uses this area of your code, your website might be badly harmed. This function is not recommended because there are better alternatives.

The stack is a data structure for storing values in a LIFO fashion (last in, first out). A JavaScript execution stack, on the other hand, is a stack that keeps track of all the execution contexts created over the script life cycle.

A JavaScript developer should be aware that JavaScript is single-threaded, meaning that it can only perform one task in the web browser at a time. As a result, a stack is established for other actions, functions, and events, which is known as the Execution Stack. The Call Stack is another name for the execution stack.

However, when the execution of a function is identified, the execution context is produced and placed on top of the Global Execution Context. The procedure continues until the entire code has been executed.

Consider the following example to better understand how the execution stack works:

Finally, when the full code has been executed, the JS engine removes the GEC from the current stack and JavaScript stops execution.

During the creation phase, two-state components are created:

The following is a conceptual representation of the execution context:

What is the Lexical Environment made up of?

A new Environment Record is created each time JavaScript code is evaluated (var/func declarations or assignments) to record the identifier bindings created by that code. In JavaScript, this environment is referred to as the scope.

When the JS engine encounters a variable inside a function, it will look in the current function's environment record for the variable's value (local memory).

If it can't find the variable within, it will search the outer scope (its parent environment record) all the way up to the global scope until it finds it. The scope chain is the name given to this lookup procedure. In future articles, we'll aim to go deeper into the scope chain.

Within the Environment Record, there are three types of subclasses:

Note that when we say "conceptually," we don't mean that the pseudocode below is a tangible representation of the environment that the JS engine creates; rather, it's just a way to grasp the concept by visualizing it.

Using the code snippet above, let's try to walk through each stage of what happens during the Creation Phase:

After that, we'll discuss how the JavaScript code is performed.

After you've completed the creation step, you'll move on to the execution phase. The JS engines scan over the function in the code one more time, updating the variable object with the values of the variables and then running the code, which is known as an execution phase.

Let's look at the execution stage for the example we just discussed:

There's a lot more going on in the Execution Phase, such as object mutability and immutability checks, but I tried to keep the processes simple so that the primary idea in this article wouldn't get lost.

However, if you want to learn more about JavaScript, you can go through the JavaScript Spec.

Why is the Execution Context Concept Important?

According to some research, the human brain has the capacity to store as much information as the entire internet in its memory.

But isn't that something we shouldn't take for granted?

As a result, a reasonable query may be, "Why is this topic important to learn?"

Once we have a thorough understanding of these ideas as JavaScript Developers, we will be able to introduce fewer errors into the source code, become boss at doing outstanding code reviews, have amazing eyes for debugging, and find easier solutions to deal with production issues.

While you don't need to know all of these concepts to be a successful JavaScript developer, having a basic understanding of them will help you clear your head when it comes to the more difficult topics.