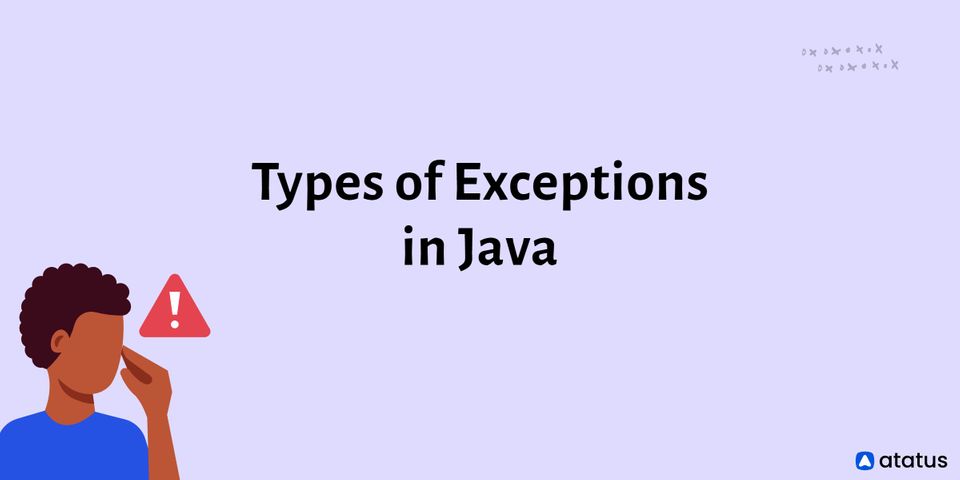 Java is an object-oriented programming language. It supports a variety of techniques, including exception handling. This Java feature allows developers to control exception-related runtime issues.

In Java, an exception is an event that happens during the execution of a program and prevents the program's instructions from flowing normally. Exceptions are bugs or errors that we don't want and that prevent our application from running normally.

In this article, we are discussing exceptions in Java. You'll also learn about the various types of exceptions that can occur in Java.

What is an Exception?

An event that occurs during a program's execution and prevents the program's instructions from flowing normally is called an exception. It is an unwanted or unexpected event that can occur in application code at compile-time or during run-time.

The occurrence of exceptions might be due to a variety of factors. An exception may be made in the following scenarios:

When a method identifies an error, it generates an object and sends it to the runtime system to be processed. The exception object contains details about the error, such as its nature and the program's current state at the time of occurrence.

When a method throws an exception, the runtime system tries to figure out how to handle the situation. The ordered list of methods that were called to arrive in the method where the error occurred is the set of available "somethings" to handle the exception. The call stack consists of a set of methods.

The runtime system looks up a method in the call stack that has a block of code that can handle the exception. An exception handler is a name given to this section of code.

The search starts with the method where the error occurred and moves backwards across the call stack, calling the methods in the sequence they were called.

All exception types are subclasses of Throwable, which is a built-in class. As a result, Throwable is at the very top of the exception hierarchy. Two subclasses just below Throwable divide exceptions into two separate branches.

An Exception is in charge of one branch. This is a tried-and-true method for detecting unusual circumstances that user programs should be aware of. This is also the class you'll subclass in order to make your own unique exception kinds.

The other branch is headed by Error, which describes exceptions that your program isn't meant to catch under typical conditions. The Java runtime system uses exceptions of type Error to highlight errors that are related to the runtime environment.

What are the Types of Exception?

In Java, there are primarily two types of exceptions:

The fact that the program throws exceptions throughout the compilation process is readily visible in the output. There are two approaches to resolving such issues.

With the help of the throws keyword, you can declare an exception.

The method which is calling printFile method must handle the exceptions.

There is an alternative to the procedure described above for resolving exceptions. Using try-catch blocks, you can keep track of them.

The code will run without a hitch, and the file will appear.

Let's look at some more checked exceptions now. Here are a few examples:

When an Input/Output operation fails, a method throws an IOException or a direct subclass of it.

An IOException will be thrown by this code.

When the JVM is unable to locate the needed class, this exception is raised. A command-line error, a classpath issue, or a missing.class file could all be to blame.

A ClassNotFoundException will be thrown as a result of this code.

When a Java thread invokes join(), sleep(), or wait(), it enters one of two states: WAITING or TIMED_WAITING.

In addition, a thread can invoke the interrupt() method of another thread to interrupt it.

As a result, if another thread interrupts it while it is in the WAITING or TIMED_WAITING state, the thread throws an InterruptedException.

In this case, an InterruptedException is thrown:

This type of exception arises while using SQL syntax to execute queries on a database.

A SQLException will be thrown by this code.

The checked and unchecked exceptions are diametrically opposed. These exceptions will not be checked by the compiler at compilation time.

In another way, if a program throws an unchecked exception, the program will not throw a compilation error even if we don't handle or declare it. It usually happens when a user submits incorrect data during a program interaction.

Consider the following code sample to illustrate the concept of an unchecked exception:

Let's look at some other unchecked exceptions now. Here are a few examples:

When you try to retrieve an object using a reference variable whose current value is null or empty, you'll get this exception.

In the program, a NullPointerException occurs.

An array stores its elements in a logical order. As a result, we may use indices to retrieve its elements.

When you try to access an array with an invalid index value, you'll get this error. The value you've provided is either negative or exceeds the array's length.

If a piece of code tries to access an array index that is out of bounds, the method will throw an ArrayIndexOutOfBoundException.

The array's index is out of bounds.

When an improper or erroneous argument is supplied to a method, this type of exception occurs. If a method is defined with non-empty string parameters, for example. You, on the other hand, are providing null input strings.

The IllegalArgumentException is then thrown to inform the user that a null input string cannot be passed to the method.

An IllegalArgumentException will be thrown by this code.

IllegalStateException will be thrown by this code.

If a publishing date is already in the system, an IllegalStateException will be thrown, indicating that the book cannot be published again.

When you give a string to a method that can't be turned into a number, you'll get this exception.

NumberFormatException will be thrown by this code.

For example, if you divide any number by 0, an exception will appear. To exemplify this type of exception, consider the following code snippet:

We first discussed what exceptions are in this article. An event that occurs during a program's execution and prevents the program's instructions from flowing normally is called an exception.

We hope that this blog has answered all of your doubts and questions about Java exceptions.

Atatus keeps track of your Java application to give you a complete picture of your clients' end-user experience. You can determine the source of delayed load times, route changes, and other issues by identifying frontend performance bottlenecks for each page request.

To make bug fixing easier, every Java error is captured with a full stack trace and the specific line of source code marked. To assist you in resolving the Java error, look at the user activities, console logs, and all Java events that occurred at the moment. Error and exception alerts can be sent by email, Slack, PagerDuty, or webhooks. 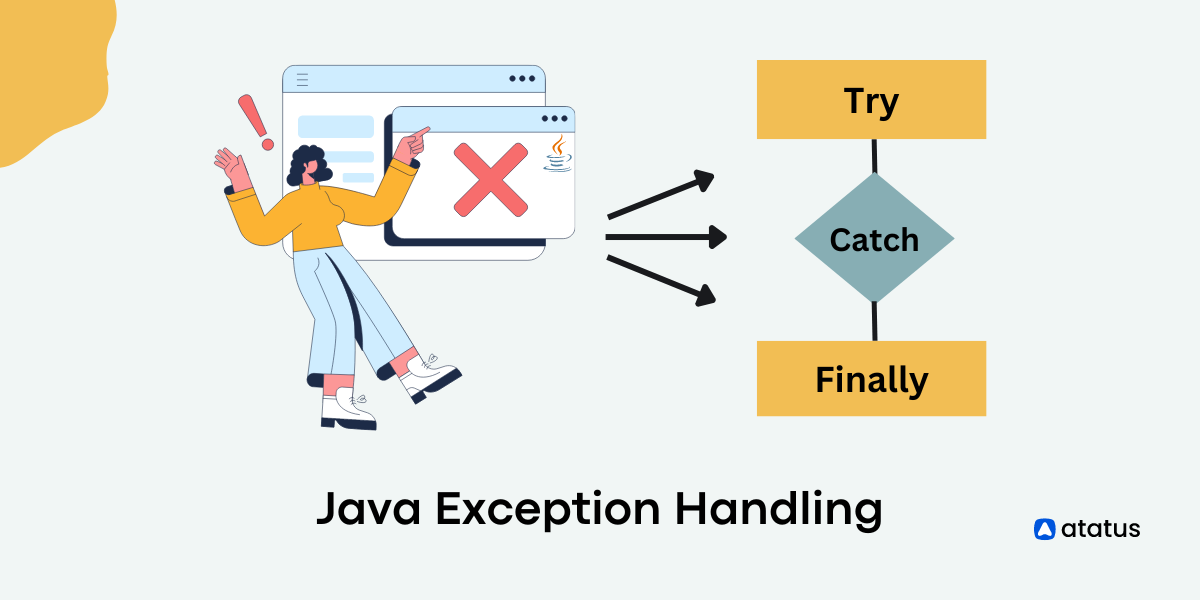