OSI Model: Layers and its functions

What is an OSI Model?

The OSI(Open Systems Interconnection Model) is a model which describes the universal standard of communication of a telecommunication system or computing system.

The communication between the telecommunication or computing system is split into seven layers: Physical, Data Link, Network, Transport, Session, Presentation, and Application Layers.

The development of the OSI model started in the late 1970s to support the emergence of diverse computer networking methods. It was published by Internation Organization for Standardization(ISO) in the year 1984. 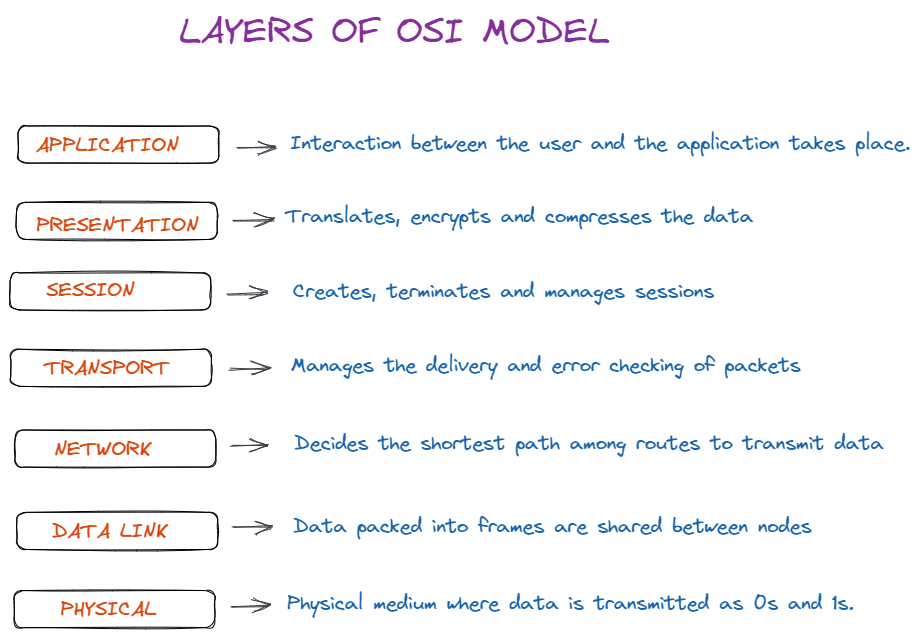 As the name describes, this physical layer is responsible for the physical connection between devices. They transmit unstructured raw data between devices, such as a switch, Ethernet hub, or a network interface controller.

It also does the conversion of digital bits into electrical, radio, or optical signals. The information shared around is in the form of bits. When this layer receives data, it is converted into 0s and 1s which are then sent back to the Data Link Layer.

This physical layer defines how two physical are connected in the network.

This layer establishes and terminates the connection between two physically connected devices. It also handles the flow control between them.

The network layer provides the way for the transmission of data from one node to another connected in different networks. A network is a medium where many nodes can be connected. Each node has its own address.

This layer takes care of packet routing. Packet routing is nothing but selecting the shortest path among the routes available in order to transmit the packet.

The protocols used to route the network traffic is called Network layer protocols. This layer manages the device addressing and tracks the device’s location on the network.

The Transport layer handles the end-to-end communication between two devices. This layer takes the data transferred to it and breaks it into segments in the transmitting end.

There are two types of protocols used in this layer. They are:

a.) Transmission Control Protocol: TCP is a standard protocol that allows the devices to communicate over the internet. It manages the connection between hosts. * When data is sent over a TCP connection then data is divided into smaller units called segments which then travel over the internet using multiple routes.

The presentation layer, also called the translation layer, extracts and converts the data into the required format in order to use it for communication.

Basically, it transforms the data in which the application layer accepts it to be.

The presentation layer is also called as syntax layer, because it converts the data and graphics into a display format for the sake of the application layer.

The application layer, also called a desktop layer, is the layer that is very closest to the end-user. The application layer handles file sharing, message handling, and database access, through the protocols such as HTTP, FTP, SMB/CIFS, TFTP, and SMTP.

Though the modern internet is based on TCP/IP model rather than OSI model, it acts as a reference model and has been helpful for IT experts to understand the networking model and troubleshoot the issues accordingly.