" Every action performed has a calculated time period, so does a program for which the time phase matters more."

When a program is executed, it consists of a series of instructions that guide the software through executing the action. Once all instructions are done, the program is set to run and this running phase or period is when the code is executed.

The runtime is essentially a system for displaying the time period during which a program is running. The programming lifecycle is also known as the software lifecycle because it is the time it takes for instructions to be properly executed.

While executing a program or running a code, there are sections of other commands and their respective time periods. In a programming lifecycle, the runtime is the final phase of execution. 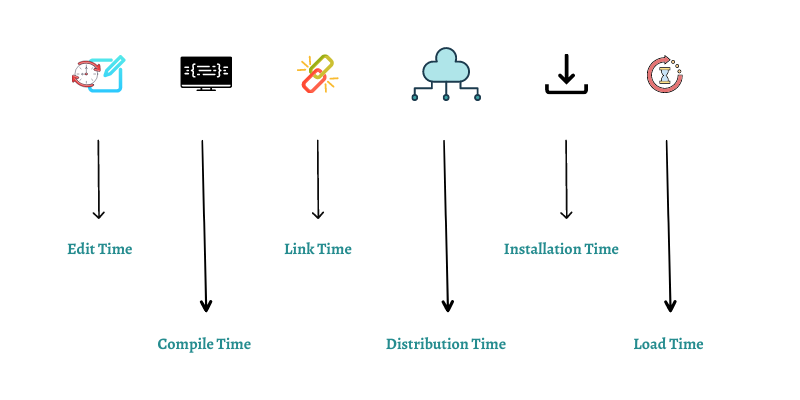 The codes written might have errors while running, the program might have bugs and there will be various other issues. Edit time is when the code of the program is edited which includes bug fixes, refactoring and other additional changes.

A linker is a computer program that takes two or more object files into a single executable file. Link time is the programming phase during which the linker is in action, which occurs after the compiling of code is completed.

The process or phase through which the program is translated in the form of source code to the user. It is basically a process of transferring a copy of the code that is executed in the program.

Installation is the action of setting up the program to be ready to be executed. The time at which the program is being executable is known to be installation time.

Load time is related to the operating system which usually loads the program or libraries to be executed. The action performed is that during the loading time the contents of the program that is being executed is read before running it.

How does runtime work?

As said before, the runtime is the last phase in executing a program. So the process goes like this.

When the program is executed and this is where runtime plays its part.

Runtime systems and runtime environments are integral parts of how instructions and codes are executed.

Runtime systems: It is part of the OS which helps in running the main program along with some additional programs.

Runtime environment: This is the place or environment in which the program is executed.

Runtime library: This is the link between the compiler and runtime, where the instructions are stored to help in executing the program.

What are runtime errors?

These errors can take different forms, including runtime errors. A runtime error is nothing but a glitch in the program or code during the process of execution.

The presence of a runtime error can be detected if the program runs slowly or if the software crashes. These errors can be caused by a variety of factors.

Programmers constantly use the word debugging while they work. Debugging is nothing but the process through which you detect and remove the errors or bugs present while executing the program.

What is exception handling?

Just by detecting the errors, it is not going to fix automatically. This is where exception handling pops in which is the process of fixing or responding to the errors and bugs that are detected while executing the program.

You do have automated exception handling languages that are designed and enabled in certain programming languages which helps in fixing the runtime errors. But generally, it is done manually by analyzing and observing the abnormalities in the runtime.

This is an application runtime that is associated with the Android OS. It performs actions like translating the byte code into instructions that are used by the device during its runtime. It uses AOT as well as JIT compilation for its performance.

This is the runtime environment that is designed for the Microsoft .NET framework. It uses the JIT compilations for the execution of the program and it is highly language-specific (i.e., only the OS can read the instructions)

JVM is a virtual machine that is used to run JAVA programs that are written and executed in other languages. The main work is to execute the codes related to the JAVA environment and libraries related to it.

Runtime is basically a critical piece of software that is needed for the execution of a program, as this entire article suggests. The main use of runtime is that programmers can easily detect bugs present during the execution period.

That's the prime reason to understand runtime systems and other systems related to them.