Simple Network Management Protocol(SNMP) is an Internet Standard protocol used for the management and monitoring of network connected devices on Internet Protocol networks.

SNMP collects data from these devices, organizes it and sends them for network monitoring and management. SNMP usually exposes management data in the form of variables on the managed systems organized in a management information base (MIB) which describe the system status and configuration.

These variables can then be queried or manipulated remotely by managing applications. There are many MIBs defined by standard bodies like the IETF and the ISO, as well as proprietary MIBs defined by a specific IT equipment vendor such as Cisco and software vendors like Oracle and Microsoft.

SNMP, defined by the Internet Engineering Task Force(IETF) is an element of the Internet Protocol Suite. SNMP is one of the broadly accepted protocols. Mostly, professional-grade networks come with bundled SNMP agents.

Then, these agents should be enabled and configured to communicate with the network monitoring tools or network management system(NMS).

The different versions of SNMP are explained as follows:

Currently, SNMPv2 which is the second version of SNMP, is the most commonly deployed protocol version.

SNMP tools can perform many functions which consists of a pull and push communications between network devices and the network management system.

Some SNMP commands are as follows:

The working of SNMP is completely based on the commands as SNMP uses commands to establish communication between the manager and the agent.

The four main components of the SNMP network are as follows: 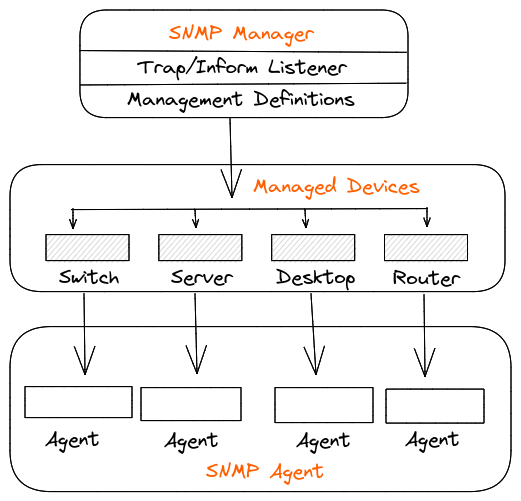 The agent’s software runs on the hardware or service will be monitored, collecting data about bandwidth use, disk space or CPU usage. The agent finds and sends this information back to SNMP management systems when queried by the SNMP manager.

These are the network devices and services in which the agents usually run. Devices like routers, switches, printers, or wireless devices, come under this category.

This is a data structure with .mib extension, which is in turn a text file that describes all objects used by a particular device that can be controlled or queried by SNMP. Each MIB is assigned an OID(Object Identifier).

Management Information Base(MIB) organizes OID hierarchically, which will be represented in a tree structure that has individual variable identifiers for OID.

SNMP is usually not enabled by default on devices. That means in most cases, admins have to log in and turn it on in order to make SNMP data available. This reduces the risk of running an insecure version of SNMP. Since admins have to turn it on, they can check the suitable and best version to run on the device.

The vulnerability in the versions of SNMP protocol(SNMPv1 and SNMPv2) is that SNMP messages are sent across the network unencrypted, which means anyone with a packet sniffer can read the community string as plain text.

SNMP should be secured carefully to avoid any breaching. Here are some best practices in SNMP to consider.

Following these best practices is very necessary as a single attack can result in a costly data breach.